Last time in the Make it work, then make it pretty series, I described my simple, handwritten lesson plans, full of scratch-outs and post-it notes. The format was a response to my struggles using technology to craft perfect lessons and class materials during my first year of teaching.

From my point of view, my lesson plans and tech-free approach were successful in that I spent energy and effort on the quality of my lessons rather than their appearance. It worked for me. Lesson planning this way was manageable for my first year of science teaching and my students performed as well on common assessments as their peers in other classrooms.

But my opinion is not enough. I need to know how this style works for my students.

Jennifer Gonzales from Cult of Pedagogy suggested that teachers improve their practice the way that developers improve software, by embracing beta. During a beta release, developers do a trial run, expecting problems and bugs, and collecting feedback from users to improve their software or product.

My upperclassmen in AP Physics 1 were at first totally taken aback when there was no PowerPoint guiding our class, a common teaching style at my school. That plus, the fact that this curriculum was just plain different, and a number of other factors combined to give us a really rocky start to the school year.

We were still struggling to find our groove after a couple of weeks, and I could sense them growing frustrated and discouraged, some to the point of wanting to drop AP in favor of the college-prep level physics class. No software developer wants to lose users. My beta class had some serious bugs that needed to be worked out.

In response, I stopped for a day and gave them an opportunity to voice their concerns and suggestions. We had just come back to class following school closings due to Hurricane Harvey and we all needed a chance to reset. I sat on a stool at the front of class and opened the floor to their comments and concerns. 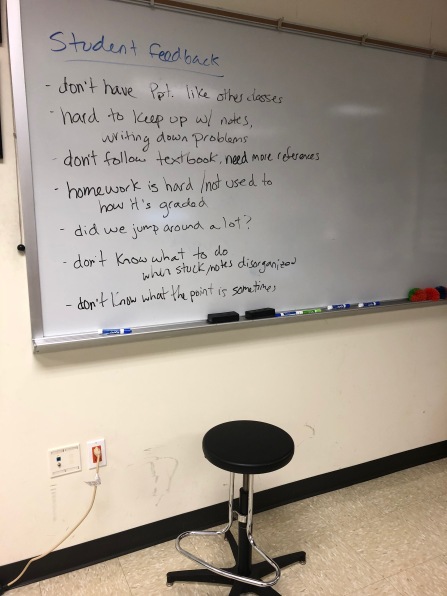 I focused on really listening to what the students had to say and wrote a list of their thoughts on the board as they shared. It was really hard to just sit there and listen, but it was worth it.

Only after they all had a chance to speak did I respond to their questions. I explained where I could the reason to my madness, like why we seemed to be moving out of order compared to other physics classes in the school or why I was so picky about their homework.

In beta testing, the purpose of collecting feedback is to guide the changes that will improve user experience. For each of the concerns my students brought up, we came to an agreement on a reasonable action item to help us moving forward.

*Instead of following a textbook, I provide Fact Sheets for each topic. I expect students to memorize the basic facts listed.

I would say we all did our end of the action items. Except that I failed to maintain a document consolidating all our in-class problems. It was one thing too much for me in my no-tech year. This year, though, I’ve made this resource a priority and keep all our in-class problems available to students without adding too much to my plate. I’ll write about this in a future post.

A couple of weeks after our heart-to-heart, I checked in with my students to see how our different changes had turned out by creating a brief survey and providing class time to complete it. I wanted to know whether my bug-fixes were working and what aspects of my beta release needed further improvement.

To survey my students, I use Microsoft Forms because our school is set up with Windows 365.* I designed a quick survey that could give me some numerical feedback, but I primarily wanted students to have space to answer open-ended questions about what was working and what could be improved.

*At my previous school, which was set up with Google for Education, I used Google Forms, which work pretty much the same way.

In general, I received constructive feedback and heard positive things about the class. Students still had concerns about the pace of the class, the “harsh” grading of homework, and the fact that we were working through topics in a different order from all other physics classes (AP or otherwise).

I was glad that I took the time to check in with my students regarding our recent changes. Collecting feedback early in the year, rather than at the end of the semester or  the end of the year, helped me to improve the class experience and effectiveness for everyone involved. I also built a foundation of trust with my students, who found that I genuinely cared about them and their learning.

Throughout the rest of the year, I did my best to keep their comments in the back of my mind and to request frequent, informal feedback (in addition to my formative assessments) from students. I worked hard to communicate our course direction with daily lesson objectives, unit plans, and fact sheets and sample problems organized by topic.

I would say that sometime around October we found our rhythm as a class. By December I felt that I had good relationships with many individual students. In March, I was touched by some of the thoughtful notes that my seniors gave me while I was on Senior Retreat with them. In April, we had an awesome time building stuff in preparation for the AP test, which was “lowkey hard,” and my students felt confident in their physics. In May, the juniors and I wrapped up the year with some fun activities and I excitedly watched my seniors graduate.

You can learn a lot about an app or a piece of software from user reviews. I truly enjoyed reading my course evaluations at the end of the year. Some students still thought my lectures were too disorganized, but mostly had positive things to share.

One of my favorite questions from the course evaluation was, “If you could travel back in time to the beginning of the year and tell yourself one thing about this class, what would it be?”

“To know that you might not understand everything right at the beginning of it being taught, but that it will eventually be in your mind and that Dr. Lara wouldn’t let anyone not understand the material we needed to know.”

“To CALM DOWN and realize that physics works and I have an amazing teacher. I freaked out a lot when I first got to this class because it was my first AP course […] Although physics isn’t my favorite subject, I have learned a lot and will take that knowledge and apply it later on in life.”

“I would tell myself that this class is so much fun and to not give up even when I am struggling.”

“Just trust the process because it’s going to be okay. Lara knows what she’s doing after all. You will figure out what a force diagram is.”

“HAVE FAITH! DON’T HALF DO YOUR HOMEWORK, WORK HARD! At the beginning of this year I was about to transfer out of this class because I was so discouraged and frustrated, but I’m so glad I didn’t because I ended up loving this class […]”

I’m pretty sure that all of this started with sitting on a stool in front of all my students and giving them the time and space to voice their questions and concerns. Then doing something about it.

Like a software developer, I collected feedback on the course continuously, not just at the end of the year, adjusting and making changes where I could.

How do you collect student feedback? Have you ever had to turn around a difficult class situation? How did you do it? Let me know in the comments!